This afternoon saw the launch of South Wales Police Cardiff‘s most recent Community Cohesion project – the Cook-off!
Building on the success of both the Football and Cricket competitions, a new Cohesion competition has begun to engage more women from Black, Asian, and Minority Ethnic communities with their local police officers. 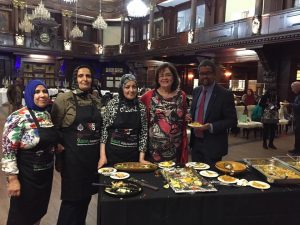 Local police officers and women involved in a Women Connect First project cooked cultural dishes which meant something to them served to an audience of over 50 people at The Exchange Hotel Cardiff.
These were then judged by award-winning Chef Stephen Gomes and Valerie of Moksh,Cardiff, Chief Superintendent Belinda Davies, Assistant South Wales Police and Crime Commissioner Mark Brace and Cllr Ashley Lister.
Both teams put in a fantastic amount of effort and skill into their dishes, however it was a clear victory for the ladies!
I am truly looking forward to seeing how the competition unfolds and to offering my full support in the future.