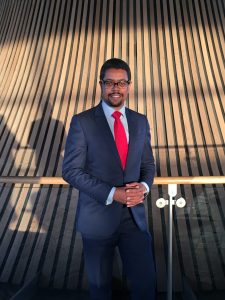 I’m Vaughan Gething, the Member of the Welsh Parliament for Cardiff South and Penarth. This page is here to let you know a little bit more about myself and what I do.

I was born in Zambia. My Dad was a Welsh vet who moved to Zambia and met my Mum.

After my time at Aberystwyth, I studied at Cardiff University to qualify as a solicitor. I went to work for Thompsons Solicitors, becoming a partner in 2007. I have been active in the trade union movement including time as a workplace shop steward. Eventually I became the youngest President of the Wales Trade Union Congress in 2008.

I continued to get more involved in politics after chairing Right to Vote, a cross-party project that encouraged greater participation from black minority ethnic communities in Welsh public life. During that time I was particularly encouraged by a number of people in different communities to stand for office myself. I eventually did stand and represented Butetown on Cardiff Council from 2004-2008.

I was elected as the Member of the Welsh Parliament for Cardiff South and Penarth in 2011. Initially I was a member of the Health and Social Care committee and the Environment & Sustainability committee. I remain interested in rail services and was the founding chair of the cross party group for Railways. I was also the chair of the cross party co-operatives and mutual group. I was appointed as the Deputy Minister for Tackling Poverty in 2013 – the first black minister in any of the devolved administrations in Wales, Northern Ireland or Scotland. In September 2014, I was appointed Deputy Minister for Health and was appointment Cabinet Secretary for Health, Well-being and Sport after my re-election in May 2016.

When I’m not in the Welsh Parliament, I enjoy watching rugby and football, being a big fan of both. Cricket is my main sporting passion but I am now a (mostly!) retired cricketer. However most of my time outside parliament is spent with my wife and young son.