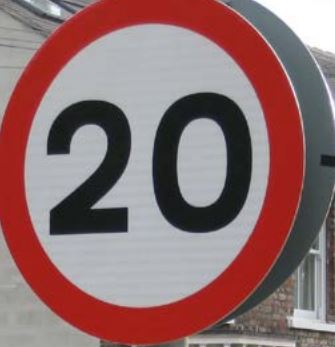 Following a recent column I wrote on road safety I am pleased to announce that plans to make 20mph the default speed limit on residential streets have moved a step closer. Last week following a recent report commissioned by the Welsh Government it announced plans to implement the new default speed limit by 2023. I have long supported the call for 20mph in built up areas across the constituency and have worked with residents and the 20 is Plenty group to campaign for this.

Road safety is an issue across the constituency. I have been contacted by a number of Sully residents over concerns of road safety in the area. Residents have expressed their concern over the growing volume and speed of traffic which passes through the village and their desire for a 20mph speed limit to be implemented. I know that, like most places, there are hotspots of unsafe driving. Residents have raised particular concerns with speeding on South Road, Cog Road and Beach Road. Constituents have told me that there is reckless overtaking in the area and there have been incidents of drivers ignoring crossing lights and pedestrian crossings.

A 20mph speed limit would make a real difference in making our streets safer. Reducing road speeds in built up areas has a proven track record of saving lives and avoiding serious injury. Figures show that people hit by a car travelling at 35mph only have 50 per cent chance of survival. If the speed is reduced to 20mph the chance of survival leaps to 97 per cent. Shockingly more than half of all road deaths in the UK are caused on roads where the speed limit is 30mph and studies have shown that a reduction to 20mph can have a 70% reduction in child pedestrian accidents.

It is more than pure speed, a reduction would help to create a calmer and safer road culture. Many local authorities across the UK have already adopted 20mph as the default speed limit in residential areas. As a result of this many local authorities have reported significant reductions in average speeds. It would have a minimal impact on journey times but a significant impact on pedestrian and cyclist safety.

Beyond improved road safety the measure could also get more people walking and cycling and support the ongoing work to promote sustainable communities.

The Welsh Government will now consult on the plans, before they go before MS’s to be voted on. If you would like to be kept informed on the progress of these plans please get in touch with my office at [email protected] or on 0300 200 7150. As ever, if you need assistance or have any concerns that you would like to discuss with me please do get in touch.