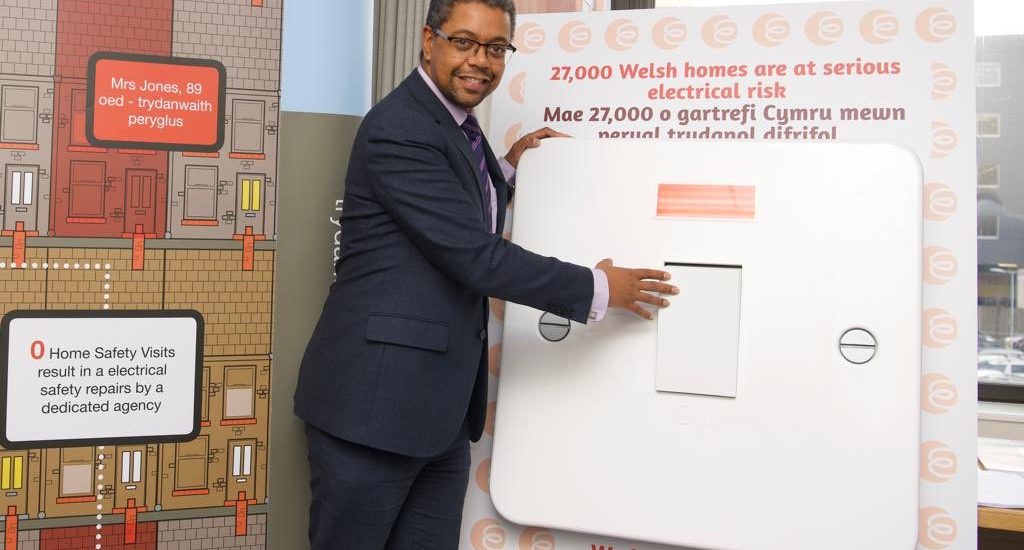 In Wales, there were nearly 1,900 fires caused by electricity in Welsh homes over the last 5 years.

“It’s been estimated that almost 30,000 Welsh homes are at potentially serious risk of fire due to old or damaged electrics”, explains Vaughan. “So, I wanted to come along today to see how I can help keep my constituents – particularly those who are most vulnerable – safe.”

The drop-in marked the beginning of Electrical Safety Week Wales and offered AMs the opportunity to discuss the issues on why Wales has some of the highest number of fires caused by electricity, compared to other countries of the United Kingdom.

In a response to the Welsh Government’s report on this issue, the Charity has highlighted how fires in older housing stock in Wales (a significant proportion of which was built before 1919), is linked to deteriorating electrics. Home Safety Visits in Wales are conducted by the Fire and Rescue Services, and they are a vital trusted service which can pick up potential dangers with electrics in people’s homes across the country, especially vulnerable people who live in older housing.

Vaughan Gething said: “I back the Charity’s efforts again this winter during Electrical Safety Week Wales to keep my constituents safe. Taking simple steps like ensuring white goods are not used during the night, or when you go out of the house can help prevent fires in people’s homes in Cardiff South and Penarth”.

“Currently, Home Safety Visits – usually undertaken by Fire and Rescue Services – provide an opportunity for electrical problems to be identified”, explains Robert Jervis-Gibbons, Policy & Public Affairs Manager at Electrical Safety First. “But there needs to be adequate follow-up and a system in place to protect the most vulnerable and we are calling for a review on how Home Safety Visits operate in terms of electrical safety and ensure that there are proper funded referral processes for people who cannot afford to improve their electrics in their home. In the meantime, we are working with Assembly Members to keep everyone in Wales safe from electrical risk across the winter time when electricity in Wales is in greater use.”

The Charity is now calling on the Welsh Government to establish a dedicated scheme to fund electrical repairs in Welsh home to protect the most vulnerable.